Join us for a screening of the critically-acclaimed documentary film Brothers of the Blacklist with the film’s director, Sean Gallagher. Co-sponsored by iEAR Presents!

NOTE: Sean will be joined by Kirk Allen and Hugh Harris-Inniss, and attorney Scott Fein.

Kirk Allen and Hugh Harris-Inniss are graduates of SUNY Oneonta and were two of the 125 students put on the Black List.

Scott Fein is the lawyer who represented the students during the Black List litigation. He is a partner at Whiteman Osterman & Hanna, a law firm based in Albany, NY.

Brothers of the Black List tells the story behind the longest litigated civil rights case in U.S. history. It all began in September 1992, when an elderly woman in Oneonta, NY reported that she had been attacked in an attempted rape by a young black male who cut his hand during the altercation. This led to a college administrator at nearby SUNY Oneonta giving police a list of the names and residences of all 125 black males in town, questioning them and demending to see their hands.

Director Sean Gallagher is a filmmaker based out of Westchester, NY. He works as an in-house editor at the Jacob Burns Film Center in Pleasantville, NY. He also serves as a Media Advisor on the Advisory Board of Engeye Scholars, a non-profit that supports the educational needs of children living in and around Ddegeya Village in Uganda. Brothers of the Black List is Sean’s first feature-length work. 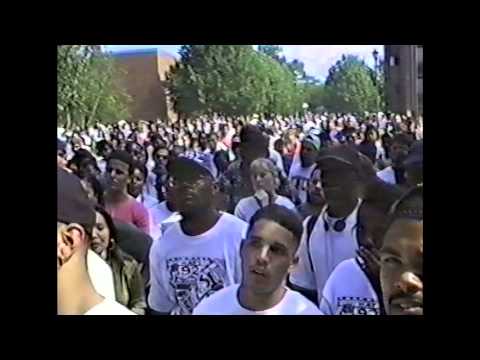 and deeply moving film, Brothers of the Black List, arises from a harrowing incident dating back to 1992. This unflinching and beautifully made documentary bears witness, from a fresh perspective, to the failure of our most honored institutions to help turn the tide on this persistent, chronically American social dynamic.

“In the days of stop-and-frisk and Trayvon Martin, the well-manicured issue of equal rights – most especially as applies to young men of African descent – remains as molten as ever if you just pay attention to what’s going on, or if you scratch the skin – as Sean gallagher does here, of our nation’s racial history through time immemorial.

“The eponymous blacklisted brothers themselves are amazing to meet! There is more rooting interest’ on screen in this picture than in any Hollywood blockbuster. Looking back at the events that shaped, and scarred, their lives as college students, these heroic, now grown-up Americans make your heart break and your pulse pound at the horror of the what they were subjected to, and the heroism and elegance of their responses, both then and now.”

– Jonathan Demme, Academy Award-winning filmmaker of The Silence of the Lambs, Philadelphia, and Rachel Getting Married