Delgrès is a deep roots trio that blends French Caribbean and New Orleans’ musical styles for an all-new sound. The trio is made up of guitarist and vocalist Pascal Danae, sousaphonist Rafgee and Baptiste Brondy on drums. Named for Officer Louis Delgrès, the band pays tribute to the forgotten hero, a biracial man who spent his life actively resisting colonial forces in Guadeloupe and died in battle fighting Napoleon’s enforced reinstatement of slavery in 1802. 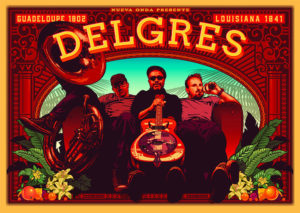 The trio was founded by award winning Guadelupean composer and musician Pascal Danae who was inspired by  New Orleans jazz fusion, and brought together drummer Baptiste (with whom he had played previously in the band Rivière Noire) and experienced jazz horn player Raphael ‘Rafgee’ Gouthière, on a whim, to produce a critically acclaimed, radical roots group. The group sings mainly in Creole, with dance worthy tracks that encourage pause and reflection. Their debut album Mo Jodi was released in 2018, and can be purchased here.

Check out the Times Union article featuring Delgrès and their upcoming performance!