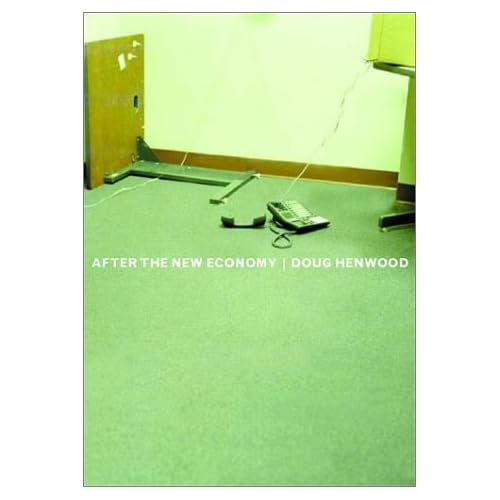 More than twenty years ago, convinced that the 1980s experiment with free-market economics was a financial and social disaster and that much writing on economics was dry and dated, Doug Henwood founded the critically-acclaimed Left Business Observer.

Invited here as part of the Capital Region Social Forum, he’ll be addressing the current crisis of neoliberalism.

TROY–Independent journalist Doug Henwood, editor of the Left Business Observer, will be speaking on the topic of "Neoliberalism in Crisis" at The Sanctuary for Independent Media on Friday, September 26, 2008 at 7 PM. Admission is by donation ($10 suggested, $5 student/low income). The Sanctuary for Independent Media is located at 3361 6th Avenue in north Troy (at 101st Street). Call (518) 272-2390, email [email protected], or visit www.MediaSanctuary.org for directions and more information.

Doug Henwood’s lecture serves as the capstone event for the Third Capital Region Social Forum, a series of lectures, films, and events taking place across the region between September 19 and October 3. Taking its cue from the World Social Forum, whose motto “Another World Is Possible” has become a touchstone for the global peace and justice movement, the Capital Region Social Forum brings together activists, organizers, academics, and members of the Capital District community to learn, discuss, and critique—and imagine alternatives to—neoliberal economic and social policies that have contributed to the vast inequality, growing militarism, ecological crisis worldwide.

This year’s forum, “Cracks in the Edifice: Neoliberalism in Crisis,” also includes lectures by Lori Wallach of Global Trade Watch and Steve Early, a labor journalist and organizer. It coincides with the launch of the Globalization Studies Major at UAlbany on September 25. Past Forums have examined issues as varied as human rights, U.S. militarism, environmental crises, labor organizing in Mexican maquiladoras, universal health care, food sovereignty, and more.

Doug Henwood, editor and publisher of Left Business Observer, received his B.A. in English from Yale University in 1975. Henwood did graduate work in English at the University of Virginia, concentrating on British and American poetry and critical theory. In the course of studying the theory and history of the U.S. political economy, Henwood became more deeply interested in economic matters and less so in literary ones. After five years of contemplation, convinced that the 1980s experiment with free-market economics was a financial and social disaster and that much "left" writing on economics was usually dry and dated, Henwood decided that there was room for a newsletter addressing both these deficiencies. He founded Left Business Observer in September 1986. Almost from the first issue, the newsletter was a critical success.

LBO covers economics and politics in the broadest sense. Recent and persisting obsessions include the meaning of Bushism; income distribution and poverty in the U.S. and elsewhere in the First World; the globalization of finance and production; the worldwide attack on pensions; the 1990s boom and its gloomy aftermath; the economics of energy. Every issue includes a report on the world’s financial markets and central banks.

Besides editing LBO, Henwood is a contributing editor of The Nation, and hosts a radio weekly program on WBAI (New York). His book "Wall Street" was published by Verso in June 1997 and is now available for free download. His social atlas of the U.S. (in the Pluto atlas series), "The State of the USA," was published by Simon & Schuster in the fall of 1994. His latest effort, "After the New Economy," was published in late 2003 by The New Press. He is now in the early stages of a book on the current American ruling class.

The Sanctuary for Independent Media is a community media arts and production center located in an historic former church in Troy, NY. The venue is an intimate and acoustically excellent space which seats about 150. The Sanctuary hosts screening, production and performance facilities, training in media production and a meeting space for artists, activists and independent media makers of all kinds.