REGISTER FOR THIS EVENT AND GET THE ZOOM INFORMATION BY CLICKING HERE.

The “Norlite Bill” (Senate bill 7880B / Assembly bill 9952B) would permanently ban Norlite LLC from burning AFFF, which contains toxic PFAS chemicals. Despite the state’s focus on responding to the coronavirus crisis, the bill passed unanimously in both houses of the state legislature in June. It is sponsored by Assemblyperson John McDonald and Senator Neil Breslin. Governor Cuomo has yet to commit to signing this bill.

At an October 21st public information session, DEC officials did not deny a statement made by former EPA regional administrator Judith Enck that the DEC is making recommendations to effectively gut the Norlite Bill by changing the ban to a temporary moratorium that the DEC could lift at any time. Meanwhile, environmental groups and local governments around the state have submitted resolutions and letters in support of the ban. The bill has no opposition on the record. 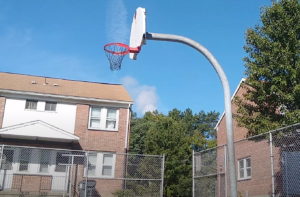 Photo: Lights Out Norlite. Emissions from Norlite can be seen at the basketball court at Saratoga Sites in Cohoes.

Featured photo: Lights Out Norlite. Norlite’s stacks can be seen from the Route 7 bypass off 787 just outside of Troy. Taken in September 2019, during the period that Norlite was burning AFFF.