Join director Penny Lane for a screening of her new documentary Hail Satan?, a film about The Satanic Temple, including its origins and grassroots political activism. The film shows Satanists working to preserve the separation of church and state against the perceived privilege of the Christian right. After the film, there will be a Q&A with filmmaker Penny Lane and Dex Desjardins, Chapter Head of the Satanic Temple Albany Chapter. 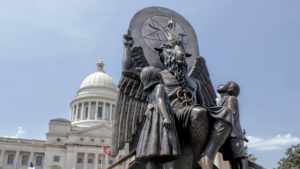 When media-savvy members of the Satanic Temple organize a series of public actions designed to advocate for religious freedom and challenge corrupt authority, they prove that with little more than a clever idea, a mischievous sense of humor, and a few rebellious friends, you can speak truth to power in some truly profound ways. As charming and funny as it is thought-provoking, Hail Satan? offers a timely look at a group of often misunderstood outsiders whose unwavering commitment to social and political justice has empowered thousands of people around the world. An inspiring and entertaining new feature documentary from acclaimed director Penny Lane (Nuts!, Our Nixon).

Before the film screening, there will be a workshop from 4:30pm to 6:00pm, click here to view that event.

Penny Lane is an award-winning nonfiction filmmaker who was named one of Filmmaker Magazine‘s “25 New Faces of Independent Film” and a Chicken & Egg Breakthrough Award winner. Her most recent feature-length documentary HAIL SATAN? recently debuted at Sundance and will be released by Magnolia Pictures in 2019.

Penny’s short films are distributed by VTAPE and include titles such as THE VOYAGERS (2010), THE COMMONERS (2009) and WE ARE THE LITTLETONS: A TRUE STORY. Her 2005 short THE ABORTION DIARIES has become an important organizing and educational tool across the nation. THE ABORTION DIARIES has screened in at least 42 states & worldwide at over 350 different community venues, ranging from bars to art centers to clinics to colleges, and also on Yes! Television and Free Speech TV. In 2006, Penny was given a Choice USA “Generation Award” for her work on this film.