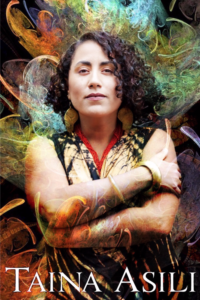 The activist singer-songwriter celebrates her birthday and the release of a new album, Resiliencia, with a full slate of special guests and her awesome band!

And we’re celebrating resilience too! Join us for the launch of our Spring ’19 season and the kick off of our Sanctuary Sustainer campaign

Taina is a Puerto Rican singer and activist who fuzes her passion for culture and representation into a powerful Afro-Latin sound. She uses her empowered voice to create music promoting activism through messages of peace and resistance. One of her most prominent successes to date, along with features in the Huffington Post and Billboard Magazine, was her performance before an audience of more than half a million people during the Women’s March on Washington in January 2017. She’s an advocate for those facing oppression, in songs such as her most recent hit, “No Es Mi Presidente.”

“Resiliencia!” is a wide-ranging anthology of stories told by women of color from all over the United States, Puerto Rico, and Canada that Taina has connected with and interviewed. These voices are rooted in strength and unconditional love in their passion to be heard. Learn more about the album at www.tainaasili.com and check out the first music video from the album right here:

BIOGRAPHY
Taína Asili is  a New York based Puerto Rican singer, filmmaker and activist carrying on the tradition of her ancestors, fusing past and present struggles into one soulful and defiant voice. Her music combines powerful vocals carrying themes of social justice with an energetic fusion of Afro-Latin, reggae and rock. For over 20 years she has brought the music of love and resistance to venues across the globe – From the Women’s March on Washington to the nationwide Rock Against the TPP Tour. After the 2016 election, a bigger audience has caught up to the artist Huffington Post named one of “12 Freedom Fighting Bands to Get you Through the Trump Years.” Her protest songs “No Es Mi Presidente” and “Freedom,” inspired by social movements against white supremacy, mass incarceration, and police violence, have been lauded by the likes of Rolling Stone and Billboard. Taina Asili’s music offers a sound that spans continents, exuding strength of Spirit, and inspiring audiences to dance to the rhythm of rebellion.

“Every successful movement for social change has had music and culture baked into it. This is exactly the type of music our generation needs as we work to address the many issues facing our society.” – Cory Doctorow, Boing Boing

“In attempt to proliferate the messages of equality and justice, Asili recently released a powerful new song and accompanying music video, “Freedom,” which features Black Lives Matter and prisoner justice activists in an attempt to invigorate and support their work.” – Julie Zeilinger, Mic.com

“The colorful video is the perfect companion to the track inspired by the jumping rhythms and political chants of Fela Kuti‘s signature afrobeat sound.” – Karas Lamb, Okayplayer

“Taína Asili is a Puerto Rican vocalist with a soulful Afro-Latin vibe that exudes authenticity. Her impactful message on “Freedom” is a battle cry for movement. While most of today’s urban music and Hip Hop is fraught with over sexualized images, stereotypes and void of substance, “Freedom” is a much needed helping of sonic empowerment.” – I. Vasquetelle, Insomniac Magazine

“Asili is an artist to take very seriously, and this is an important, political-yet-joyous work of passion and purpose, using music to promote ideas and truth, like it used to be.” – David Malachowski, producer and journalist for The Times Union
“… a pan-global roots-musical mélange that appeals to the struggle of tradition to envision a world of social justice.” – Josh Potter, Assistant Editor for The Metroland

“Her vocals penetrate your heart, the lyrics stir your conscience, the melodies are soothing and the rhythms are contagious.” – Bob Goepfert, journalist for the Troy Record

“Taína brings the struggles, their drum beats and fists raised, to her work, safeguarding respect for those who have come and for those who are about to come.” – Gina Renzi, Director of Foundation Arts