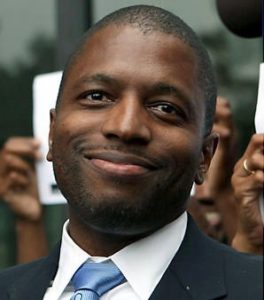 In 1988, Ronald Kitchen was tortured by Chicago Police detectives into confessing to a murder he did not commit. After 21 years in prison and more than a decade on death row, he was finally exonerated. In My Midnight Years: Surviving Jon Burge’s Police Torture Ring and Death Row, Kitchen and co-authors Thai Jones and Logan M. McBride tell his story. Check out the New Yorker story, “How Chicago’s Public Schools Are Teaching the History of Police Torture,” by Thai Jones, September 27, 2018. 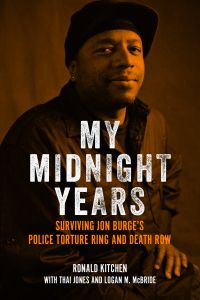 RONALD KITCHEN BIORonald Kitchen was walking to buy cookies for his young son on a summer evening in 1988 when Chicago detectives picked him up for questioning. As the officers’ car headed toward the precinct, the twenty-two-year-old called out the window to his family, “I’ll be back in forty-five minutes.” It took him twenty-one years to make it home.

Kitchen was beaten and tortured by Chicago’s notorious police commander Jon Burge, and his cronies, until finally confessing to a gruesome quintuple homicide he did not commit. Convicted of murder and sentenced to die, he spent the next two decades in prison—including a dozen years on death row—before at last winning his release and exoneration. Ronald Kitchen’s ordeal was not his alone. He was only one of scores of victims of Jon Burge and his notorious Midnight Crew, a group of rogue Chicago police detectives who spent decades terrorizing, brutalizing, and incarcerating men—more than 120 have come forward so far—in Chicago’s African American communities.

During his years in jail, Kitchen co-founded the Death Row 10 from his maximum security cellblock. Together, these men fought to expose the grave injustices that led to their wrongful convictions. The Death Row 10 appeared on 60 Minutes, Nightline, Oprah, and Geraldo Rivera and, with the help of lawyers and activists, were instrumental in turning the tide against the death penalty in Illinois. Kitchen was finally exonerated in 2009 and won a high-profile lawsuit against the city of Chicago. My Midnight Years is the first book to be published about the Jon Burge scandal.

THAI JONES BIO
Thai Jones is a lecturer in history at Columbia University, whose work examines radical social movements and political organizing. He is the author of two previous books his writings have appeared in a variety of national publications, ranging from the New Yorker and the New York Times to The Nation and the Occupied Wall Street Journal.

Dr. Alice Green is the Executive Director of the Center for Law and Justice, a civil rights organization she founded in 1985. She has a doctorate in criminal justice and advanced degrees in education, social work, and criminology.

In 1985, Governor Mario Cuomo appointed Dr. Green to membership on the Citizens Policy and Complaint Review Council of the New York State Commission of Corrections. A year later, with Senate approval, he appointed her to the position of Deputy Commissioner of the New York State Division of Probation and Correctional Alternatives. She was put in charge of strategic planning, policy, and information. After leaving state service, she became Legislative Director for the New York Civil Liberties Union where she had served as Director of their Albany Office in 1982.

Alice Green, an adjunct professor at the University at Albany, has also taught at Russell Sage and Siena College. She began her career as a secondary school teacher and social worker. For many years, she directed Trinity Institution, a youth and family services center in Albany’s South End.While there, she also did community organizing and founded the South End Scene, one of the longest published Black newspapers in Albany.