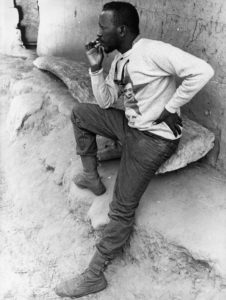 Meet Sembène, the African freedom fighter who used stories as his weapon and blazed the trail for generations of writers, filmmakers and scholars.  Join filmmakers Samba Gadjigo and Jason Silverman to see their acclaimed documentary about Sembene’s impact on African creatives.

Co-sponsored by iEAR Presents!, School of Humanities Arts and Social Sciences at RPI; New York State Council on the Arts with the support of Governor Andrew M. Cuomo and the New York State Legislature

Ousmane Sembène was born in 1923 in Casamance, a region of southern Senegal. In 1944, Sembène was drafted into the French army. The experience broadened his horizons, and deepened his understanding of colonization.  His time in the military served as the basis for his films Emitai and Camp de Thiaroye. After his time in the army, he moved to Marseille in France where he published his first poem in 1956. Before returning to Africa in 1960 he published three more successful novels. When he returned to Africa he spent the next 40-years creating films to help show that Africa was not only a media consumer, but a media producer. According to the Sembène website, “Sembène was among the first filmmakers to “indigenize” cinema, forgoing Hollywood-style moviemaking for African narrative structures and aesthetics.”

Samba Gadjigo (co-writer, co-director, co-producer), the director of the documentary Making of Moolaade, is the world’s foremost expert on the life and work of Ousmane Sembéne and author of Sembéne’s official biography. He was born and raised in Senegal and is professor of African Studies and French at Mt. Holyoke College.