Branda Miller is the Arts & Education Coordinator at the Sanctuary.

She is dedicated to using art for achieving a more just and sustainable world. 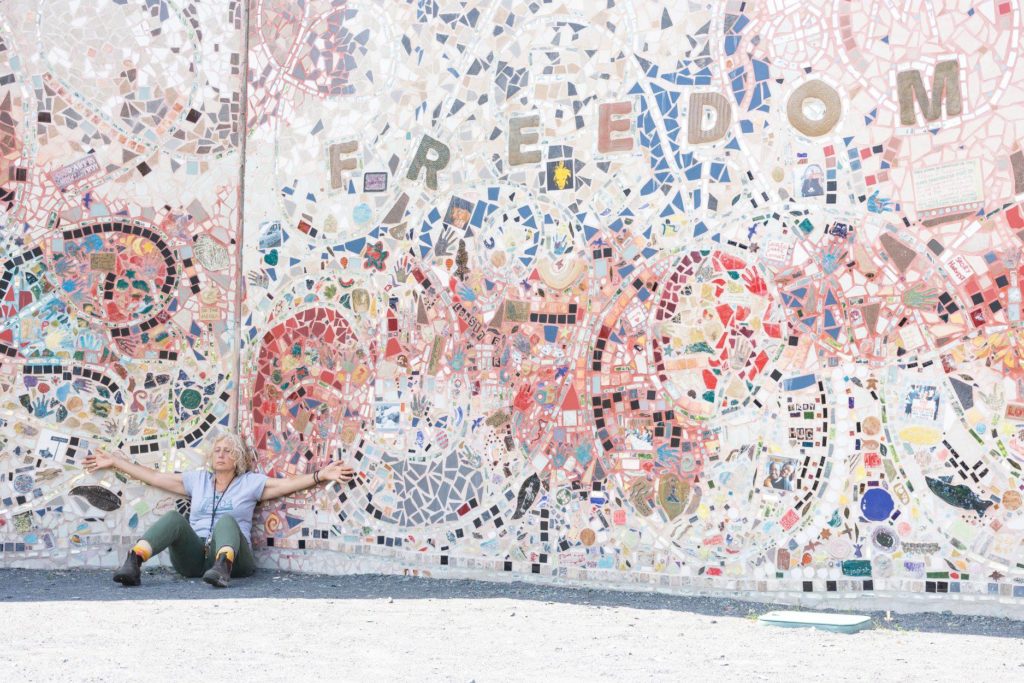 Steve Pierce is the Executive Director of Media Alliance. He is a media reformer and multi-media producer, with three decades of experience in the organizational and technical implementation of the telecommunications infrastructure. His PhD is from the Department of Science and Technology Studies at Rensselaer Polytechnic Institute, where he is a member of the adjunct faculty. Dr. Pierce is a media activist and multi-media producer with extensive experience in media reform and sound production. He teaches Radio Production, Engineering Ethics, and Leadership at RPI. His past jobs experiences in media reform include: Executive Director, Deep Dish TV Network, New York NY, 1989-92, Assistant Manager, Pacifica Radio WBAI, New York NY, 1988-89, Program Director, WWOZ Radio, New Orleans, LA, 1987- 88, and Journalist, New Orleans LA, 1980-87.

Igor Vamos is an internationally known multimedia artist, leading member of The Yes Men (using the alias Michael “Mike” Bonanno), and an associate professor of media arts at Rensselaer Polytechnic Institute. He is also a co-founder of RTmark and the recipient of a 2003 Guggenheim Fellowship, granted for a project that used Global Positioning System (GPS) and other wireless technology to create a new medium with which to “view” his documentary Grounded, about an abandoned military base in Wendover, Utah.

Vamos earned an undergraduate degree in Studio Art from Reed College and an MFA in Visual Arts from the University of California, San Diego. While at Reed, Vamos organized a student group called Guerrilla Theater of the Absurd. They performed and documented “culture jamming” acts of protest, including Reverse Peristalsis Painters, where 24 people in suits stood outside the downtown venue of Dan Quayle’s fundraiser for Oregon senator Bob Packwood and drank ipecac, forcing themselves to vomit the red, white and blue remains of the mashed potatoes and food coloring they had consumed earlier; and a middle of the night contribution to the debate over renaming Portland’s Martin Luther King, Jr. Boulevard, wherein the city awoke to find that all of the street signs and freeway exits for another major boulevard had been changed to read “Malcolm X Street.”

Another successful early project was the “Barbie Liberation Organization,” where Vamos and his cohorts purchased three hundred Barbie and G.I. Joe dolls, exchanged their electronic voice boxes, and then returned them to the stores; the soldiers ended up saying things like “Let’s go shopping!”, while the Barbies exclaimed “Vengeance is mine!”. It was a small-scale project and few people actually found themselves in possession of the switched dolls, but the stunt nevertheless attracted national media attention

Nao Bustamante is an internationally known artist, originally from California, and now residing in upstate New York. Bustamante’s precarious work encompasses performance art, video installation, visual art, filmmaking, and writing. The New York Times says, “She has a knack for using her body.” Bustamante has presented in galleries, museums, universities and underground sites all around the world. She has exhibited, among other locales, at the Institute of Contemporary Arts in London, the New York Museum of Modern Art, The San Francisco Museum of Modern Art, Sundance International Film Festival, El Museo del Barrio and the Kiasma Museum of Helsinki. In 2001 she received the prestigious Anonymous Was a Woman fellowship and in 2007 named a New York Foundation for the Arts Fellow, as well as a Lambent Fellow. In 2010 she was an unlikely contestant on TV network Bravo’s “Work of Art: The Next Great Artist.”

Bustamante is an alum of the San Francisco Art Institute, New Genres program and the Skowhegen School of Painting and Sculpture. Currently she holds the position of associate professor of New Media and Live Art at Rensselaer Polytechnic Institute.

Kathy High is an interdisciplinary artist working in the areas of technology, science and art and is organized with The Sanctuary for Independent Media a series of artist workshops, “BioArt in an Industrial Wasteland.” She produces videos and installations posing queer and feminist inquiries into areas of medicine/bioscience, science fiction, and animal/interspecies collaborations. Kathy is a visual/media artist, independent curator, and Associate Professor of Video and New Media at the Department of the Arts at Rensselaer Polytechnic Institute in Troy, NY. She teaches digital video production, history, and theory and has been working in the area of documentary and experimental film, video and photography for more than twenty years.

Branda Miller is a Professor of Media Arts in the Integrated Electronic Arts Department at Rensselaer Polytechnic Institute and Arts and Education Coordinator at The Sanctuary for Independent Media.  She has developed numerous media literacy and education projects using interdisciplinary electronic arts production. An Emmy Award-winning editor, Professor Miller’s course “Art, Technology and Community” connects RPI students to the Sanctuary and the Missing Link Ministry. Branda helps the Sanctuary hands on with editing their films from the events, to helping out with all different workshops that go on throughout the Sanctuary and the surrounding community. Branda was the Project Coordinating Artist for the “Found Art in North Troy” paroject that the Sanctuary held, as well as an artist/educator in the Youth Media Sanctuary and “Be The Media” workshops. Branda is an internationally recognized media artist and it a crucial part of the Sanctuary.

Andrew Lynn is a key member to The Sanctuary for Independent Media. He is a media producer, shooter, editor, and graphic designer, and professor at Hudson Valley Community College. He received an MFA in Electronic Arts from iEAR Studios at Rensselaer and teaches video production, digital imaging, stop-motion animation, and media literacy, as Media Educator at the Sanctuary. Andrew is also the founder and volunteer coordinator of Troy Bike Rescue. He is the TBR and Food Cycle site supervisor, and oversees activities such as youth employment, workshops, and compost delivery coordination. He is a past Education/Development Manager for Manhattan Neighborhood Network’s Youth Channel where he taught workshops, developed curriculum, coordinated community media trainings, and supervised a teams of peer educators. Andrew is on the Board of The Sanctuary for Independent Media.