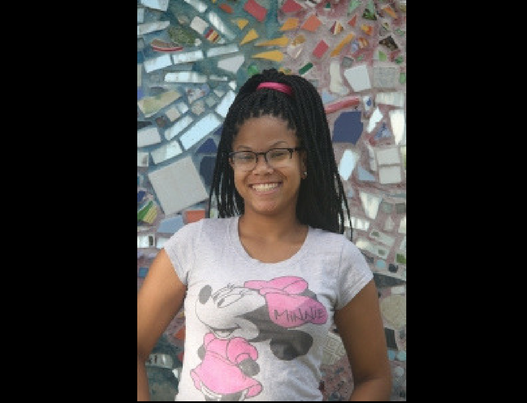 You used to live in the house next to Collard City Growers while the garden was starting and helped to start it. What was that experience like?

When I was younger, I used to draw cartoon characters. When there was first a shed at Collard City Growers, I used to draw smurfs and stuff and put them in the shed. When I lived there [in the house next to Collard City Growers] when they first started doing it, the soil was no good. Nothing would grow. Literally, I had to help Abby find new soil and to build the things that carry the water around the garden.

How does it feel, having gotten to watch it change so much?

It’s just funny. All the struggling that the people who first worked here went through, and now to see that it’s so easy just to plant something. They would get mad and stuff, because they weren’t doing as much as they could. The first group [of Uptown Summer Youth] – I knew a lot of people in the first group – they would feel that the job was too hard for them. The days were long and hard and they didn’t feel like they were making progress. It’s different now.

Do you have any other memories from working in the garden when you were a kid?

I was always with Abby during the summer. You could never catch me not by her side. As soon as they started doing it, she just knocked on my door one day to come out and help with this project. It was just a bond or whatever.

Do you remember what it was like living next to the garden when it was still a vacant lot?

Me and my cousin buried a butterfly in it when it was a vacant lot. I had a butterfly that I brought from school and it died, so we buried it. We really dug up dirt and put it there and covered it back up. That summer, that’s when they came [to create the garden].

What is the experience of having your first job like?

It feels good, because I can prove to my parents that I can do something for myself. As long as I providing for myself, I can call myself doing something, instead of just sitting on the couch all day like usual teenagers or being out on the street.

Why do you think it’s important for youth to be involved in stories?

So that our stories can be heard, because it doesn’t happen a lot. Around here, usually, the youth have a reputation for not wanting to do better things because that’s what they’re taught. At the Sanctuary they teach us. Summer youth basically is a good way to see to it that you have a better future than what maybe your parents or their parents had or were brought up on.