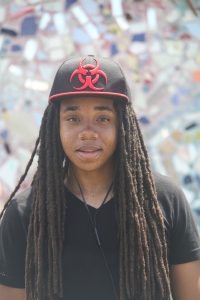 What power does youth media have in a community?

I think we might be able to realize the problems that are around, because I don’t think that people know about the problems that are going on. That’s their norm, so they don’t think of that as an issue. If they see those problems glorified, then they’ll realize that it’s an issue. [By glorified, I mean] brought up, shown, people videotaping it and realizing that it’s not supposed to be that way.

What is your earliest childhood memory?

When I was four, there was a blue bag and in the bag was a random Buzz Lightyear toy. I thought it was the one from the movie. I don’t know where it came from. There was no packaging or anything but it was there, fully working and everything. He had the little jetpack thing that popped out and the laser wrist thing.

What is something people may not know about you just by looking at you?

When people look at me, they think I look bored or agitated all the time, but that’s just how my face is. I’m not that serious about really anything. I guess getting things done is one of the only times I get serious.

What plans do you have for the future?

One plan that I have for the future is that I want to be an electrical engineer. There was a teacher that I used to have that used to be able to fix electronics and stuff. He would spend an entire class period taking apart a lamp – cutting wires off of it and such – and being able to fix it in 30 minutes. I want to be able to learn how to do stuff like that.