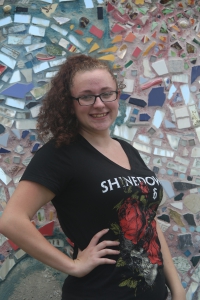 Do you feel that you are a storyteller?

Yes, because I’m working on a project right now, a personal project, and it’s basically about how to make Troy a better place. I always felt like Troy needed to change, because it’s really gone downhill since my parents lived here and my grandparents. It’s totally polar-opposite of when my grandparents were in Troy now that I’m in Troy. There’s a lot more violence, a lot more abandoned buildings. The education has changed a lot. It’s very different.

What is your vision of what Troy could be?

There could be less violence, and you have to start that with the kids. You’re not going to change the adults, but if you teach the kids to be kind, they’ll grow up being kind. It’ll change the way they think they need to be, and they’ll be on a better track. I hope Troy changes that way. To change the youth first.

How do you think you and your stories can change Troy and change other people?

I think by showing and telling that Troy can be a better place if we make it a better place. I saw this thing on Facebook that said “Top Five Worst Places to Live in America” and number two was Troy. I can’t believe that we’re the top two, because Troy never used to be like this. It used to be a thriving city that used to produce collars. It’s totally changed. I got really mad because I never knew it was that bad or that’s how America sees Troy or that’s how the media sees Troy. It really shouldn’t be like that. Troy is a good place, but it could be better. I just don’t like how it’s bad.

What do you want people to get out off the stories you tell?