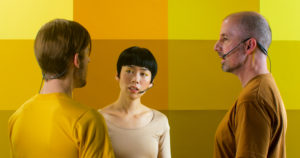 This Saturday the multimedia opera “Oyster” will be performed outside of New York City for the first time–at The Sanctuary for Independent Media in Troy.  WOOC correspondent Steve Pierce spoke to composer Joe Diebes about his ambitious production. The multimedia opera is about iconic folklorist Alan Lomax and his Cantometrics system of categorizing world music, set in the lull between the McCarthy era and the advancing information technology age.