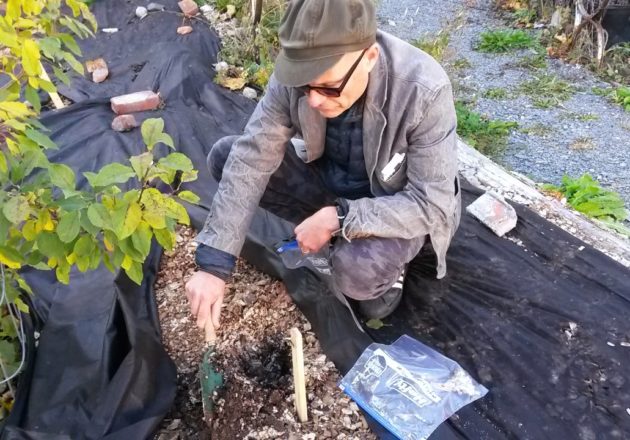 On November 12th, Kathy High and Intern Sierra Sukay went to the Sanctuary to meet with Oliver Kellhammer and assist him in collecting soil samples from the L-lot. Oliver, in conjunction with the Sanctuary, started bioremediations efforts in the L-lot this summer. In the back portion of the L-lot where the soil suffers from high lead concentration, was separated into three sections. One section has been covered with mulch and a fungi called mycelium, which has been used to reduce the amount of lead and other pollutants in the soil in sites around the world. Buckwheat was planted in the second section. Buckwheat is a very efficient tool for bioremediation because it grows quickly while “sucking” up the lead in the soil and storing it in the plants tissue. The third section is a control; it contains a collection of weeds “native” to Troy. 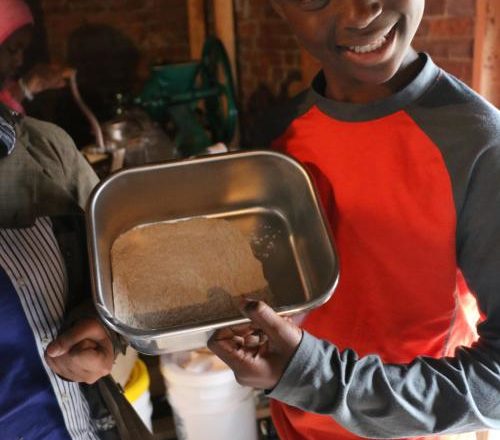 Saturday October 18th, I worked and attended the Futurefarmers demonstration at the Carriage House and Collard City Growers garden. The event started out with a work party early in the morning. Volunteers cleaned the Carriage House. People arrived for the event around 1. A lot of people of that attendeded. Some attendees were local youth, …

One of the more recent additions to the Sanctuary’s gardens, the “L-lot” behind the corner of sixth avenue and Glen street, was tested for lead on October 7th. This new project of NATURE Lab (North Troy Art, Technology and Urban Research in Ecology) is headed by local resident and partner with The Sanctuary for … 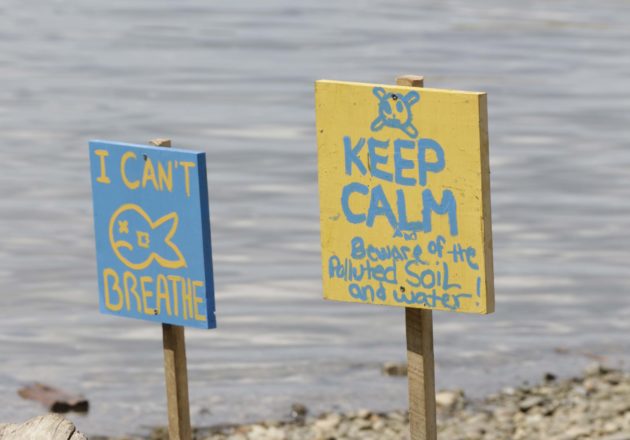 Eco Action in the Industrial Wasteland

Brandon Ballengee creates transdiscoplinary artworks inspired from his ecological field and laboratory research. Since 1996, a central investigation focus has been the occurrence of developmental deformities and population declines among amphibians. He extends his work into local communities teaching mainly youth, …

August 8th – Our Water Ways Define our Sense of Place

*Today is the last day of uptown summer. After 20 amazing days, the ‘Youth Change Makers’ worked so hard getting down to the nitty gritty of environmental justice in our community. They have been raising environmental awareness by creating maps, painting trashcans, and making Hudson River pollution signs. The youth also learned how to …

August 7th – Swim at your own Risk

*During our last week of Uptown Summer 14, Brandon Ballengee returns to North Troy to participate with our community in more Hudson River Eco-Actions!

-What is Water Pollution: caffeine, hormones, organic chemicals, plant nutrients, sediment, carcinogenic variables, are all things that do not break down in …

“You all have dreams and ideas. So don’t give up on them. It may not happen today but tomorrow it might. “ – Lou Rosamilia (Mayor of Troy)

*Danny works with the other teens to work on painting another garbage can.

August 5th – "Without hard work, nothing grows but weeds."

*Today The Youth Change Makers break up into groups to tackle various jobs:

August 1st – Maps of the Community

* The ‘Youth Change Makers’ worked on their final drafts of their respective mapping projects today. The ‘Neighborhood Violence Map’ was organized with a key to indicate the different forms of violence: police, fights, shootings, and stabbings.

Brooklyn and some of the other teens noted that their favorite …

*The first couple hours this morning consisted of a group talk. We all took the time to recognize that we are now at the mid point in Uptown Summer. We talked about our accomplishments, what we hope to achieve in the last ten days, our concerns, and the biggest joys we have.

*Financial Fitness: Morning ice breaker- Smart financing. We learn different methods of budgeting and being ‘smart’ with money. How to save, plan, borrow, and earning capability*

Thursday July 17th “Who am I to judge?” – Pope Francis

The Youth Change Makers had a conversation about thinking deeply and interpreting different meanings for things. We thought about ways to broaden our horizons and helping others think more in depth about common subjects such as trash and pollution. “For Every Action there is a Reaction” Everyone and everything is connected. People to environment, animals …

-The Youth Change Makers start the morning watching videos and learning technical techniques such as framing and composition. They leaned how to properly set up a photograph or video shot by examining certain photographic and cinematic procedures such as the Rule of Thirds.

-The Youth Change Makers start the morning watching videos and learn video making techniques such as juxtaposing, showing conflicting scenes, and back and fourth perspectives to illustrate a point stylistically.

-We reflect on last week and discuss some of …

*Strength team with Steve- Concert setup; The group helped move all equipment and gear to Freedom Square for tonight’s performance of ‘Debo Band’ to celebrate the launch of Uptown Summer!

To see a video of the QR Code Workshop click here!

* “What Does Environmental Justice Mean To You?” The group responded by saying they would like to see more trash cans around to control the littering, more gardens available so people can eat their own home grown food, better filtered …

Wednesday July 9th What we did today!

To see a video of the Poetry Workshop click here!

-“Find Your Own Voice” by Jayne Cortez, is an inspiring poem Cara uses as an example of how …

Tuesday July 8th Uptown Summer: Reflections and summary of what we did today

*Mapped our community: Everyone had their own camera and walked around the town and took pictures of their homes. Then later they chose their favorite photo they took so it will become a print to needle point it on a tee shirt (Be creative tee shirt making!). The group felt the project was very personal and …